All the Bubble Tea in China.

One day during the blistering heat i dived inside a shop to try and get some air conditioning. There was none. However there was a fish in a money box on the counter next to a sleeping shop keeper.

“Is it like Japan? I love Japan.” This was the first of my many ill-advised and probably slightly ignorant questions I asked prior and during my Trip to China.

Last year I was offered a contract to tour China for 3 months, an offer I jumped at. I love jobs like this as they pay for everything. You are sent via plane and travel via tour bus from hotel – venue – hotel etc. However I soon realized things were going to be slightly more difficult than I had originally expected on the flight out there.

This is my reaction to my friend H’s plane food. We were given the option of ‘Western or Chinese breakfast’ She leapt at the chance to try this Asian delicacy. She received something that could only be described as Gruel, Kind-of like a grey Rice Pudding. Her response “oh dear…” in what was somewhat of a prelude of the adventure we were about to take.

In order to sort some Visa issue out on day one we were all taken by our company to what can only be described as a mud hut to get china sized passport pictures taken. Needless to say I attempted to show off… 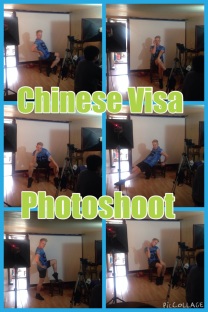 I thought I was hysterical however the lady taking the pictures in a room that had the ideal setup for any sexual predator, was less impressed.

Our second day in China was super exciting. We acted like real culture seeking tourists and visited our first temple. It was truly beautiful and really amazing to see.

This was my attempt to become one with my surroundings.

A week or so into our adventure, I realized that I was not quite as outgoing as I had originally thought. I had already become tired with how difficult everything was. Now I have traveled the world, I have seen so many different ways of life. China had something else. It felt like you were constantly fighting against the grain to get the simplest of jobs done. I’m not sure if this is to do with the way the country is controlled or a cultural incompatibility with my brash western attitude but it was proving to be tough.

I went to a restaurant one day and ordered the simplest thing on the menu. They had written in English ‘HAWAIN PIZZA’ next to this was the picture of something you could have ordered at Domino’s. I have later learned that this probably was a picture from the Domino’s website but recycled. After my hour long wait it arrived. No I have heard of a stuffed crust however this was entirely stuffed. Instead of doe it was almost like a crust inside the entire pizza base was a Turkish delight type mixture that contained fish, vegetables and mixed meats. I will literally eat anything, I mean anything I’m not fussy but at this point I hit my limit. I’m reading this back and it doesn’t even sound that disgusting but I promise you I can still smell it and it still makes me gag.

After this I decided it would be best that I stick to what I know. I then proceeded to have a three-week diet of breakfast lunch and dinner at KFC! I would occasionally substitute for the slightly less popular McDonalds or even a Poppa Johns in a bigger city.

I soon became extremely irritable which did not help mine, or my close friends experience. I would become stroppy and depressed. I would lash out at anyone who referred to the constant spitting on the street, thick air pollution, garbage-strewn streets and lukewarm beers as Culture.

SIDE NOTE: Room temperature Beers would eventually be affectionately referred to as Lukeys. For example “Grab us a couple of Lukeys for the bus.”

My friends soon caught on to the fact that I was going down a slippery slope and also that I may not fit down the slow if I continued to devour the Colonel’s deep fried goodies much longer. They took me out for as they described it Hot Pot. Now coming from the north a hot pot is something I may have at my local pub or on a rainy afternoon and my grandmother’s house. I leapt at this little slice of home.

The reality of this was a giant steaming bowl in the centre on the table. We had a menu of ingredients that we could not read so we essentially pointed at random and 10 – 15 different options. The lady came back and poured all the different parts into our steaming pot. Meats, noodles and vegetables were soon boiling away in front of us and after a few minutes we all tucked in. To my surprise it was amazing we laughed at the novelty and enjoyed a couple of Lukeys. I wasn’t even phased in the end when my friend pulled n entire chickens head out of the cauldron with his chopsticks.

I started to realize that although this country was going to be a lot of work and that perhaps it may not be the 5star experience I perhaps would have like there were going to be great memories here. I would set out each morning in search of Bubble Tea, a concept we have stolen here in the west. Although I’m sure it was here in China long before we commercialized it, I would sip my morning tapioca treat and have a little touch of home.

I have lots of stories from my time in china that I will talk about separately as they all deserve their own little space on my Blog. I had some truly amazing moments out there with super cool people and had some really hard times as I made decisions about my future. To be continued for sure…

This is a picture of a man who wanted me to take a picture of us together. I’m not sure if he had never seen someone who looked like me before or perhaps he was a Chinese celebrity and thought I would want the evidence to show my friends. Alas he was very friendly and kept grabbing my hair.